Bari Graffiti is a documentary film about Bari and the guys that brought into this town of South Italy the graffiti culture. A story that runs through the capital of Puglia from the late eighties until the new millennium. The artists, in the first times free to express themselves on the walls of the city, with the expansion of the graffiti phenomenon had to face law problems and had to take a choice: between complaints and trains whizzing by a few centimeters from their heads, writers continues to produce pieces, putting illegality between one of the qualitative principles of their culture. Bari meanwhile looks and acts: walls concession, mediation efforts of the municipality with legal graffiti meetings, citizens who defend the works of these artists by police. Twenty years after the great exploits of this art, the main proponents of Bari graffiti talks about their history among the historical hall of fame of the city. 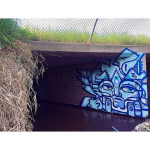