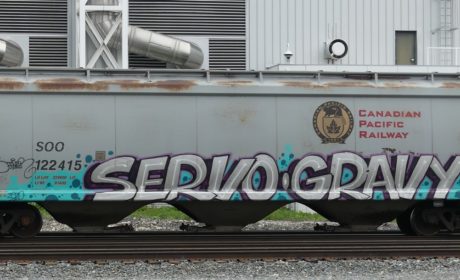 Q: Have you always written Servo? How did you come up with it?

A: I initially, like most, came up with many words during my high school years that were like 10 letters long, with no apparent meaning. I then realized that I needed to come up with a word that was about 5 letters or less that I could work with.  I started writing Faese (pronounced Faze) in the early years.  Soon after painting up some of the local spots, I caught a lot of flack from local writers for writing that word because of the New York writer with a similar name. So I took the best parts of that word, keeping the letters that I liked, and trashed the rest. I came up with SERVS. Some may remember seeing that around in the early years. Anyways I didn’t like how the S on the end always looked like the first one, so at this local jam thrown down by my man Ways back in the day, I scrapped the last S for an O, and there you go, SERVO!

“…graffiti was pretty much non-existent so no body knew what we were doing while spraying stuff.”

Q: What crew or crew’s do you belong to and tell us a bit about them?

A: I only write for one crew. CME – Create Move Elevate and Commitment Means Everything, among others. So my man Ways put me down in the early years of writing Servs, and I really started pushing it when I moved to Japan in 2005-2006 and solidified writing Servo.  We are all really good friends which is the best part of graffiti in my opinion.

Q: You painted a lot in Asia, what was that like?

A: Yes, Asia such a great place. I moved out to Japan in ’05 and stayed for a year travelling around working and exploring. It was really cool. I met up with some great people while out there. Probably the most famous graffiti writer in Japan is Very 1. He was really great to meet up with and was always down to travel around Osaka to get to some really cool spots. One spot was located in the mountains through this hole in a fence along some mountainous hiking trails – I think Fes found it a year before.  There were these things always running around making noise, something the Japanese referred to Inoshishi or their English name, Pig-Dog.  After much research and asking people about what the hell these things were, I found out that they were wild boars, who if provoked would certainly attack!  So anyways, after a year in Japan, I moved to Taiwan with Asesr and began to explore that place.  Another Canadian writer, Dabs, had already been out there for a few years and really knew how the place worked, and was great to link up with.  Man, Taiwan is the best place on earth for graffiti.  When we got there, Dabs and Chek (from San Francisco) had already hit some really cool spots. Chek is a monster for his gigantic blockbusters, so we soon began to collaborate on doing some around the city.  Riding our scooters around, there we never a shortage of spots. The city is huge, and there are tons of abandoned spots everywhere.  As well graffiti was pretty much non-existent so no body knew what we were doing while spraying stuff. There were not any laws, other than not to destroy property belonging to the military or government, which is pretty self evident.

Here is a quick story. In the second year that I was there Dehs, Chek, Katsu and myself all met up outside the subway station in Ximen, basically like times square in Taipei and we were going to do these huge blockbusters in this parking lot. The spot was sick, right on the main road, tons of traffic, thousands of people. It was great. Anyways, we were kind of unsure how far we could get before getting someone asking us what we were doing. So a couple of us are watching out while Dehs is doing some monster letters. He got pretty much all the way done, then BOOM!  Cops were in or face, asking us what the hell we are doing. Chek spoke Chinese so he was trying to calm the cops down while Dehs and I thought about our next move. Distracted, the cops didn’t even realize that we had crept off from where they were and we were free! Unfortunately we got split up. So we figured the best place to rendezvous would be at another MRT station a few blocks away from where the cops were. Thinking it was chill, I called him up and told him to meet me in about 5 minutes. Literally 2 seconds after hanging up the phone these cops are like swarming all over the place. I figured I would just try and blend into the crowd and meet Dehs past the gauntlet of officers. Little did I know, they nabbed him about 2 blocks from where I was and blamed him for some tags that had been done a few nights before on a government building. There were news cameras, good-cop bad-cop negotiations going on, and newspaper reporters. It was crazy. After being hassled for about an hour and cleaning off some tag on a door he didn’t do, he got out and met up later. Quite simply he was pissed.  We had a few beers and laughed about it later that night.

The next day, over some breakfast, who do I see on the front page of the Taipei Times, “Graffiti Writer Caught”, oh good times.

Q:  When did you get into painting freights?

A: After returning from Asia, and realizing that I could not endlessly seek out new spots, I naturally turned to the next best thing. I painted some in the earlier years of writing, but nothing too serious. There is a really great spot in my city that usually changes up and stocks new freights every few days, so there is never a shortage. The only tough thing is that they only stock CP here, so any types of CN freights are usually pretty scarce.  Sometimes we get TTX or a variety of grainers that go south, but usually, CP, IANR, GNRR and HS.

Q:  If you could paint any type of freight car what would it be?

A: CRYO’s, those gigantic buzzing refrigeration cars that are flat and awesome.  A few months back I was rolling through downtown by the local yard and saw that three had been hooked up and were rolling through. They stopped for about 2 minutes, just enough time to get a close up and snap a few pictures, other than that, they are pretty scarce.  I also like the oldies, SOO in particular, those rusty old things, CP newspaper cars, new Catalysts and TTX’s are sweet too.

Q: What gives you a visual orgasm?

A: I always enjoy seeing a brand new production done on a really nice freight car.  Most recently a Charlie Brown theme was done by the TCI crew on a brand spanking new CRYO.  It was and is, probably the best themed freight that I have seen to date. It was just really well done, really nice colours, great pieces with lots of style and a great theme. Those guys know how to do it. Other than that, a really nice silver on a blinging street spot.

Q: If you could paint a production or a freight with anyone who would it be and why?

A: As previously stated, those TCI dudes know how to rock it.  I would like to do something of that calibre with my man Asesr.  So get your boots on!  As far as a wall goes it would be great to get down with some of those MSK guys, who are in the top tier of graffiti in my opinion.  Recently on a trip to San Francisco I was trying to link up with Jurne, who is the master blaster of style. So maybe him when I travel back.

Q: What else are you into besides graffiti?

A: I am currently in school getting a BA in History.  In my opinion much of what is happening in the world today can be averted by looking at the past.  People today are too naive and do not care about what their governments are doing.  We need to be educated on how the system works, or nothing can get done.  The occupy movements are great, however most people are just mad, and are still looking for someone to blame.  Look at how the system is rigged, look at the creation of money, and the debt based economy that we live in.  Look to the US Federal Reserve who prints money out of thin air without any sort of backing, which pulls us down because our economies are so intertwined. I get kind of heated when it comes to politics.

Besides that, Snowboarding is on my radar in the winter season and of course drinking beer.

Q: Would you ever wear Speedo’s?

A: In short, no.  But I am always looking to try new things.

Q: Is there a particular city you would like to travel to and paint in?

A: My next trip will be either back to Asia or South America.  I really want to get down there and explore.  Things look so cool, and kind of Grimey which I like.  I would also like to get around the States some more. The writers I met are super nice, and the big city definitely has its perks. Oh and for sure Europe, the history of Rome and Greece definitely does it for me. There are too many places not enough time.