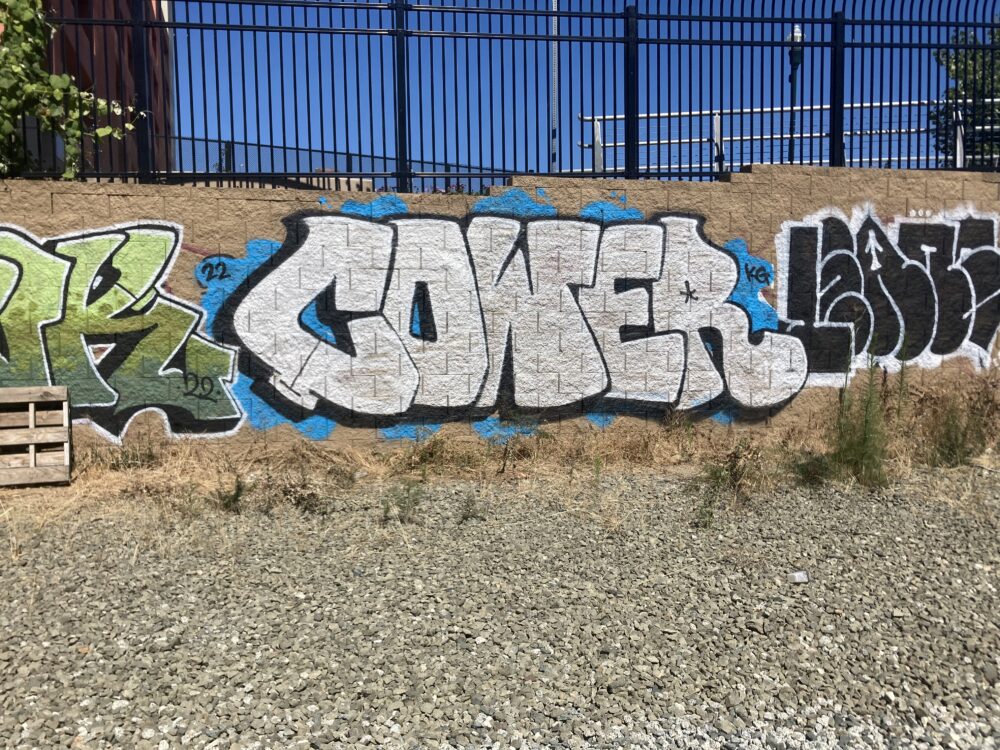 Endless Canvas: How long have you been drawing comics?

COWER: I dabbled a little bit in comic strips when i was in high school but drawing graffiti pretty much took over anytime i would put pen to paper.  It wasn’t until late 2018 until I saw head lopper and the Crimson Tower in a book store window and picked it up based off the cover. It’s to this day my favorite book.  Seeing Andrew Maclean’s style introduced me to a whole world of comics outside the big two and manga that I didn’t know existed.  I think later that week i drew a mock cover of a comic called Kool Guys as a joke. It had me(Cower) and Apose on the front and when i showed him he ragged on it super hard so of course i had to keep making the comic to spite him.  While drawing the first issue i decided Krime Guys was a serviceable name and also changed Cower to Cowboy. Maybe i should have changed Apose’s name too cuz’ I’ve heard some people aren’t sure how its pronounced. It uh-pose like to oppose something. Perfect name for him cuz he’s always hating.

EC: Do you print your comics or is it just online?

COWER: Glad you asked. I actually just printed my first full length book. It collects the first 6 issues of Krime Guys where Cowboy and Apose fight a evil tech CEO and his murderous robots.  Krime Guys vs The Block Bots. You can get it at KrimeGuys.com

EC: Does any comic books influence your graffiti?

COWER: Not really my graffiti but my comic influences are definitely Head Lopper like i mentioned before but also creators like Meredith Gran who did Octopus Pie, Liz Suburbia author of Sacred Heart and Michael Sweater who’s favorite comic of mine is Everything Sucks.  They all have their unique way of cartooning with an element of punk/diy/fun.

EC: Is there a reason you don’t paint characters?

COWER: Same reason as why I don’t really do pieces, its not that fun. I’d rather do a hundred tags than one piece any day. I don’t like standing in front of a wall trying to design some nice looking thing. I get enough of that at home drawing comics.

EC: What’s your favorite tagging, doing throw ups or piecing? you can only pick one and why?

COWER: Tagging. I’m not sure if i was influenced to feel this way by the Earsnot part in Infamy or if he just personifies my feelings perfectly but his segment in the beginning of that film pretty much sums it up for me.

EC: What got you into doing graffiti?

COWER: Not sure. I always remember getting that little jolt of excitement when seeing it as a kid and it only grew when i started to do it myself.

COWER: Kind of. KG has always been a homie crew but ya this Krime Guys era is Apose and I holding it down. Shout out to Clam though he’s a founding member of the crew and came up with KG which originally stood for Know Good back in 2010/11. Ironic cuz’ we sucked.

EC: What’s the scariest moment you had out there bombing?

COWER: Definitely the multiple times people have put guns to my head and told me they were going to kill me. I should also take this time to express my gratitude  to Apose for saving my life more than once. He’s gonna cringe at me saying this but I’m truly blessed to have him as a bombing partner.

EC: What are the biggest loves and hates in this sub cult called graffiti?

COWER: Biggest loves are definitely the friendships you make when you go through some gnarly shit with someone. Nothing shows peoples true character like a live or die moment and I’ve been lucky enough to meet some people with real character.  Biggest hates is all you other weirdos out there being weird. Cut it out.

EC: Are you wasted when yo going bombing?

COWER: What a rude question. Does my shit look like i was waisted when i painted it?

EC: Do you have goals in graffiti and life?

COWER: No goals in graffiti. I think if you’re looking to get something out of graffiti besides a good time with your friends you should find something else. In life I’m not sure. I’m already doing all the things i love. Just gonna try to keep it going.

http://krimeguys.com get your copy here.